A number of us went walking on the Chemin de St. Jacques, which traditionally begins one of its routes in Le Puy and continues about 1600km to Santiago de Compostela.  Somehow we didn’t plan it well, though, and everyone went on his or her own, encountering many groups of pilgrims along the way.

Our bus left at 11.45 and combined the choristers and orchestra as the men of the choir had been singing their church service, after which they were wined and dined by the monks. Pity we missed that! 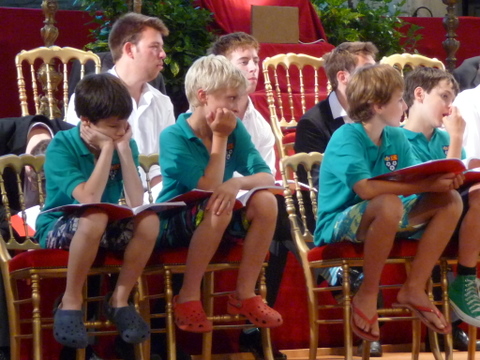 The rehearsal was only about 30 minutes but was followed by a short show-and-tell by the instrumentalists as many of the choristers had been asking about the funny instruments we were playing. They seemed especially fascinated by the theorbo and had asked some very astute questions which Bill answered with aplomb. Rudy and Bill did a small violin demonstration and then Andrew and I had to show off our bass/tenor violins. 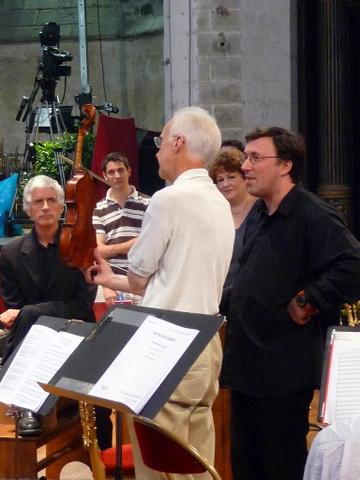 Bill and Rudy with their violins

The violas and wind instruments wisely sat out! Still, the boys seemed interested and it’s appropriate to explain what we’re doing there as well. Perhaps the interest of just one will be piqued enough to further explore the early music world as he grows up.

The concert began at 3 and although the church had been cool when we first entered, it warmed up enormously with the lights, the audience and 50 very hard working musicians. There were no surprises like the night before; everything went just as planned, which was right for the final concert. I felt quite sad to finish; it was a lovely tour and a wonderful piece to play so often, although of course everyone is happy to get back home.

We had one hour after we returned to the hotel to have a drink, relax and pack our bags before leaving for a big orchestral group dinner. Our efficient tour managers had booked a large table for us and nearly everyone joined, including the soloists and Stephen with his family. It was lovely to have everyone there and we all had a very nice, relaxed meal together, the first and only one of the tour. 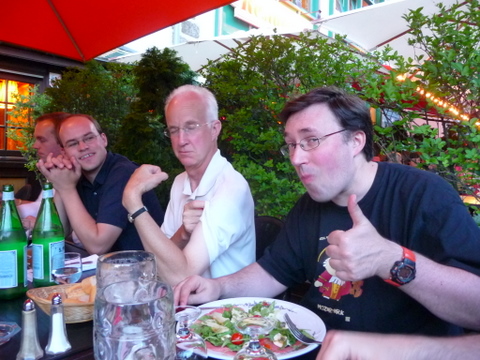 Bill showing his strength and Rudy his appreciation 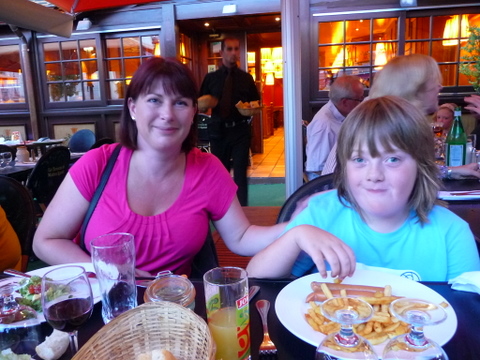 Abigail and her charming son Ewan

Some stayed out later than others, of course, but most of us were mindful of the 7.30 AM departure and were fairly responsible about getting back to the hotel. We heard later that the choral scholars had made quite a night of it. Indeed, when we gathered at the bus this morning, many of them looked much the worse for wear. We had a 2-hour bus journey to Lyon airport where we said our goodbyes as the orchestra and choir boarded their flight for Heathrow and two of us got on the train for Amsterdam via Paris. I’m sure most people will spend their journey sleeping after a relaxed yet intense and very successful tour.

This is Cassandra, your AAM-in-France-2010 blog correspondent, signing off. Hope you enjoyed our travels together!