In May 2011, a group from the AAM Society – our closest supporters – joined the orchestra in China. Elizabeth de Friend (Hartley-Brewer) tells us all about it…

Our intensive, whirlwind tour of the ancient monuments in three major Chinese cities, starting in Beijing, seemed to parallel the speed of change sweeping this amazing country. During just one week our feet hardly touched the ground, being swept through many centuries. You could almost see China fast-forwarding to modernity: new buildings everywhere, endless traffic jams choking wide, fancy boulevards, the stylish and super-modern existing alongside the seemingly chaotic and untouched traditional.

Day One:  9.30am arrived at Beijing’s vast and impressive international terminal, weary (2.30 am UK time) but all of us excited and keen to see the city after our aerial glimpses through the pall of pollution. No bureaucratic hassles or delays and pleased to note all signs in English, too. Numerous cranes reaching skywards en route to the hotel, with high-rise buildings emerging everywhere. We unpack, sort of rest, then gather for our afternoon rusty rickshaw ride through the old, scruffy narrow streets of the historic and now preserved Hutong District. Strict laws prevent adding even indoor toilets! This is old Beijing; busy, bustling, full of small businesses cheek-by-jowl with housing, and constant near collisions of cars, pedestrians and pedalled ‘lorries’ piled high with everything you can imagine. Visited the ancient Bell Tower that ordered all lives, supped a variety of china teas delicately from tiny bowls, then back ‘home’ to eat dinner overlooking Tian’anman Square. We have definitely arrived!

Day Two: Up with the lark (though not an avian tweet to be heard) to reach the Temple of Heaven gardens ahead of thousands, literally, of other tourists, to see local pensioners keeping mentally and physically alert by taking exercise. By 8am groups already waltzing to Strauss, doing keep-fit to pop and well into card and board games under trees and ancient cloisters. They even performed classical Peking operatic arias with original instruments the AAM would applaud. Our jerky Tai Chi efforts had the locals in stitches, especially Toby’s! The circular Temple (where emperors prayed for good harvests) and other adjacent Taoist Temples (early 1400s) were all beautifully restored for the Olympics. Their blue roofs signify celestial links. On by coach to view the old Summer Palace and merely a fraction of the ancient gardens “of restful peace”, styled to reflect the Empire’s differing regions. Damaged in the Opium Wars it is only partially rebuilt. Floating lunch on a dragon boat; then on to explore some of the later parts of the Summer Palace and park built in the 1800s and renovated. Long walk included the Temple of Longevity. Dinner at the elegant British Embassy – a great treat!

Day Three:  Trip to a film set – not really, just the Forbidden City (15th Century), location of The Last Emperor movie. Learning so much and here’s more to absorb from our know-everything guide. It took one million workers and 15 years to build the world’s largest surviving palace complex. And it’s huge. All high ranking officials lived in style there too and sat their all-day final exam in one of the spacious Halls. The City contains an impressive number of concubine quarters (!) and many galleries of sculpture, porcelain and paintings. Stunning, even though thronging with ‘people mountains’ or ‘people rivers’. Local tourist groups wear identical hats or T shirts to keep together. Fabulous lunch back at the hotel. Afternoon at leisure. Tried to visit National Museum but closed.

Evening at the AAM concert with Sumi Jo in Beijing’s amazing new National Centre for Performing Arts, set like a silver egg floating in water. Silken sounds in a silver casket. The audience goes wild. 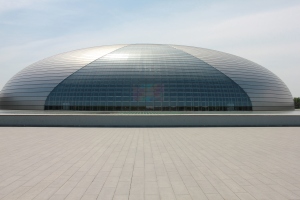 Day Four:  With Great Excitement, the Great Day arrives, our pilgrimage to The Great Wall. And it doesn’t disappoint. Picked out in rare sparkling sunlight (strong winds had temporarily dispersed the pollution) the ancient wall built between the 5th and 16th centuries to cover 5,500 miles snaked in both directions for as far as the eye could see, up and down the mountains like a giant, disappearing big dipper. The steep gradients between just two of the watch towers took us all by surprise. Hilarious dinner in a vast, local specialist Peking duck restaurant that seated over 3,000. It was delicious. Service at speed and the duck and crunchy skin carved with surgical precision – with a cleaver, split duck head with brain included! We stuck to the familiar dishes … We’re having such fun as a group. We’re eight – the Chinese lucky number.

Day Five: Another early start. Off to the airport to fly to Xi’an, one of the four Great Ancient Capitals of China and terminus of the famous Silk Road. (Given the strangest filled hard bun as a flight snack.) First stop of the afternoon, the massive old city walls, 15ms thick at the base and 12 ms high, rebuilt in Ming Dynasty from 1370. Again, strange to see the very old sited bang next to more skyscrapers and smart apartments. Second stop, the Big Wild Goose Pagoda, completed in AD 652, again freshly repainted and looking glorious in strong blues, reds and gold. Buddhism is China’s most thriving religion. Beautiful gardens that engender much needed sense of peace in this densely populated country. Last, wandered around Xi’an’s Muslim quarter, not unlike Brick Lane, with lots of street food, nuts and sweetmeats for sale. Caught up with bargain hunting for presents here! Great dinner at our very smart well-named Shangri La Hotel.

Day Six: Terra Cotta Warriors Day! Another great trip highlight and lots more history and facts to learn from excellent guides. We’re swimming in numbers – population size, birth rates, dynasty dates, size of armies, numbers dying while building, Opium War facts, acreage of gardens etc. Warriors made to the order of Emperor Qin, known as the First Emperor because he unified China in 210 BC, introducing common laws, weights and measures and currency – what imagination and fortitude, which he also applied to his death project. 6,000 warriors found so far, with life size chariots and horses. The eyes of the warriors fix you as if they were alive; and surely piecing the broken sections together demands greater skill than the original build? A great sense of reverence everywhere on this significant site. 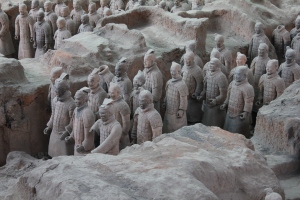 Day Seven:  Another flight and definitely ending the trip on a high – on the 80th floor of the very swanky Grand Hyatt Hotel in this sensational, modern city. 70% of the buildings built since 1990 and our hotel, next to the third tallest building in the world, was rice paddy until then. Style, class, wealth shriek out at you. Quick whizz around the city this afternoon to take in selected key features: Jade Buddha Temple in spiritual gardens, elegant trees and side temples; the neo-classical buildings of the Bund; a quick dart into the slightly ‘faked up’ shopping district to buy final silks and mementoes; and the Yuyuan Gardens (classical Ming, 1577) with water features, rockeries, bamboos and huge natural stone sculptures. Final superb dinner in a private room on the 86th floor showcasing the staggering lights of downtown Shanghai. (Menu supplied on request.) What a way to end a magnificent, fun-filled treat of a trip! Hats off to the AAM!